14. The Apple and Pear Industry

Fruit orchards where first planted on the Tasman Peninsula in the 1880s, mostly in areas already cleared during the convict era and with access to jetties located at Nubeena, Premaydena, Koonya and Gwandalan (Sloping Main).  The orchards thrived in soils ideal for apples and pears, expanding into an industry that played a dominant role in the region’s economy for seventy years. 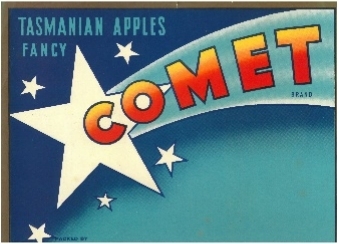 In 1880 Mr. Chesterman planted an orchard at Cascades (Koonya) which was later expanded by the Clark family who still own the property.  In 1885 Dr. Harry Benjafield took up a grant of 78 acres at Highcroft and established an orchard, naming it Wedge Garden.  The land is still owned by his descendants, the Hallam family.  The manager he sent in 1887 to run the orchard was Carl Hansen who soon developed his own adjacent orchard.  His descendants are still orchardists with pears now the dominant fruit in the last commercial orchard operation on the Peninsula. 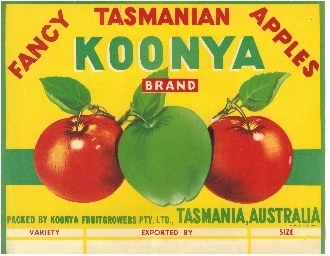 During the height of the industry in the early 20th century over forty small family run orchards existed on the Peninsula producing apples and pears for export.   Initially growers packed their fruit on their own properties.  The families had strong links with the Huon and eventually co-operatives were formed at Nubeena (1938), Premaydena and Koonya, using sheds leased and operated by the Port Huon Fruitgrowers’ Co-operative Association Ltd.  This allowed smaller orchardists access to costly facilities (such as cold storage in later years). 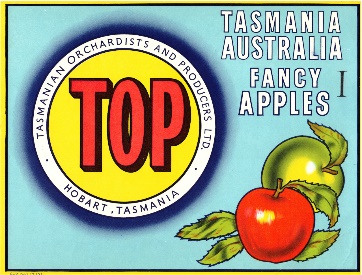 Coastal sailing vessels and steamers shipped the fruit to Hobart wharves for loading onto ships for export to the northern hemisphere where it was their “off-season” for fruit.  From the 1890s, UK markets provided profitable returns.  Shipping was later replaced by road transport as roads improved and lorries could be afforded. 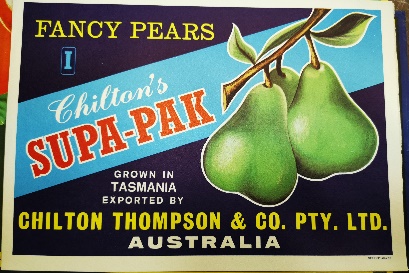 When Britain joined the European Economic Union the Tasmanian fruit industry was hard hit by the barriers and quotas imposed.  The 1970s saw a tree pull scheme introduced where orchardists were paid £2 per acre by the Government to bulldoze their trees, forcing growers to diversify into other industries.   Chicken growing, pioneered by brothers Ken & Murray MacDonald of Premaydena, took over from orcharding as the major agricultural industry on the Tasman Peninsula.

Trademark export labels were introduced for identification purposes. Labels represented the brands of the packing house, the shipping agents, or the growers themselves e.g. 'Tasma Vale', who took their name from an apple variety propagated by Dr. Benjafield. Labels were pasted on the front of timber cases (and later cardboard cartons) along with a stamp of the fruit variety, its owners and quantity of fruit. Destination brands were stenciled on the rear. 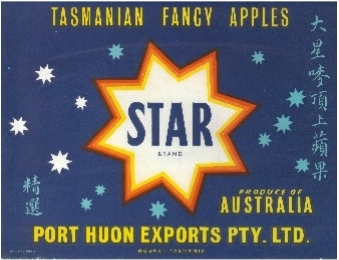